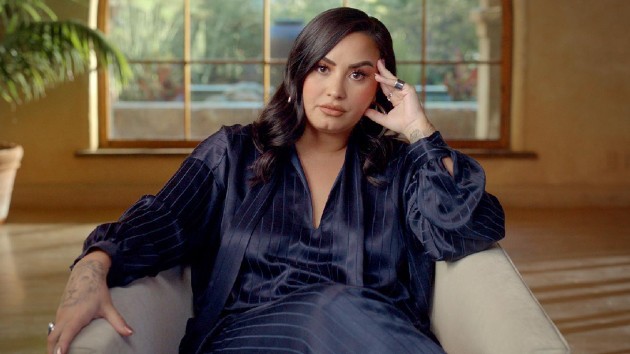 Demi Lovato held nothing back while discussing her short-lived romance with ex-fiancé Max Ehrich on the final episode of her YouTube docuseries Dancing with the Devil, which is streaming now.

Demi and Max became engaged in July of 2020; they called it off that September, which led to plenty of social media drama.

“I’m really sad that things ended the way that they did,” says Demi in the episode.  “Good news is I haven’t picked up any hard drugs or anything like that. I’m hanging in there. It’s just s***ty.”

“I don’t know how to give my heart to someone after this,” she notes through tears.

“So, I thought this whole time that I didn’t miss him, I just missed the person that I started quarantining with…I think I rushed into something that I thought was what I was supposed to do,” she explains.

“I realized as time went on that I didn’t actually know the person that I was engaged to…we were only together four or five months,” she continues.  “And honestly, it was false advertising.”

Adds Demi, “The hardest part of the breakup was mourning the person that I thought he was…but I’m not the only one who felt fooled.  I mean, I was just as shocked as the rest of the world at some of the things that were said and done.”

“There’s so much more of me that I have yet to explore,” she insists.  “One of the good things about this experience is that I’ve used this time to look within.”

Looking ahead, Demi admits “I’m actually too queer to marry a man…I’m not willing to put a label on it this second, I think I will get there.”