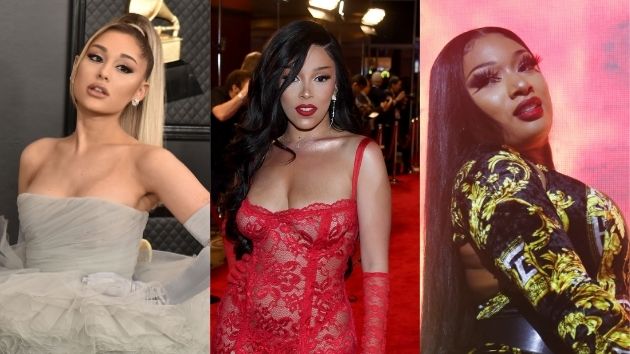 David Crotty/Patrick McMullan via Getty Images, Ethan Miller/Getty Images, Cassidy Sparrow/Getty Images for MAXIMAriana Grande‘s hit “34+35” was already spicy on its own, but add Doja Cat and Megan Thee Stallion and it gets that much hotter.

On Friday, the trio released the remix to the sensual track, which is centered around the songstress’ desires in the bedroom. The “34+35 Remix” starts out like the original with Ari delivering the first verse and hook before Doja takes over.

The “Say So” crooner stays on brand with the song as she raps suggestive lyrics about her activities between the sheets. Then, after a cut to the chorus, the “Savage” rapper does the same.

Ari first teased the collaboration on Wednesday when she posted an image of a TV screen with the silhouettes of three women — the “pov” singer in the middle and the other two had question marks. She didn’t keep her collaborators a mystery for long though. On Thursday, she, as well as, Doja and Megan, officially announced their joint record.

“34 + 35” was one of the most buzzed-about tracks off Ari’s sixth studio album, positions, which was released at the end of October — and like the song, the album is also full of sexually-charged double entendres, innuendos, and vulnerable lyrics.