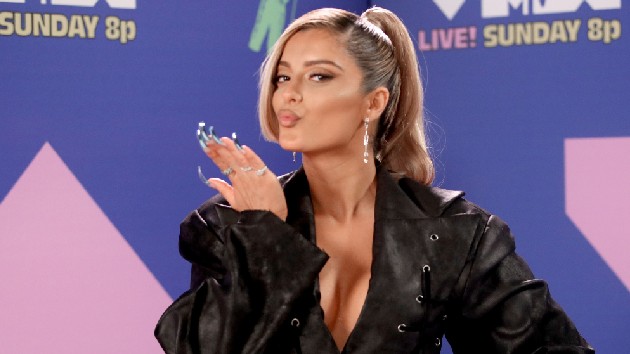 After lending her voice to the animated film UglyDolls, Bebe is now set to make her feature film acting debut in Queenpins, alongside Kristen Bell, as well as Bell’s The Good Place and Veronica Mars co-star Kirby Howell-Baptiste, and Vince Vaughn.

Queenpins was inspired by the true story of the largest coupon counterfeit scam in U.S. history. It’s about a suburban housewife who starts an illegal coupon club, cheating big corporations out of millions of dollars while enriching her fellow coupon clippers.  Bebe plays Tempe Tina, a computer hacker who helps the woman pull off her scam.

Adam Fogelson, chairman of the STXfilms Motion Picture Group, which is releasing the film, said in a statement, “This is a perfect film for Bebe to be making her live-action film debut. She’s an incredible talent and international superstar and we love her for this role…we know she will add so much fun, talent and personality to this cast.”

In other Bebe Rexha news, she stars in the latest installment of Billboard‘s Quizzed video series, answering trivia about the movie Clueless posted to her by none other than the film’s star Alicia Silverstone.  Bebe totally aces the game, prompting Alicia to say, “I’m just wondering if you were given the cheat sheet before this!”

Bebe also admits that today when she watches Clueless, she finally understands all the drug and sex jokes she missed the first time around.

“I never noticed that stuff…now I get it!” she says. “It has so much of a different meaning — it’s really awesome.”