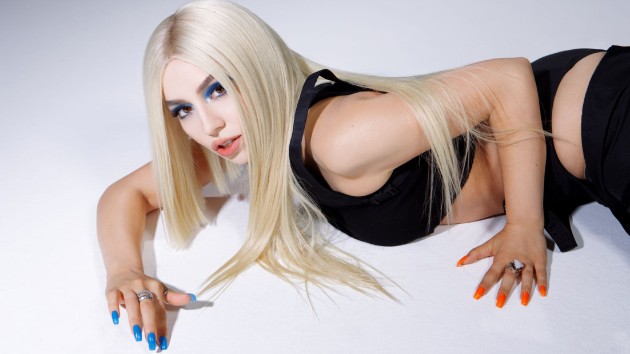 Charlotte RutherfordAva Max is celebrating her second single to enter the Billboard Hot 100, with “Kings and Queens” jumping to 32.

The 26-year-old singer admits that she took her time working on her followup to “Sweet But Psycho,” but explained why she has zero regrets about taking almost a year to put on the finishing touches.

“We changed the song so many times,” Ava told Billboard on Monday. “I wanted to make it about female empowerment and inequality, so I was taking my time with it.”

The singer also confessed to being a perfectionist, adding that unless she feels she’s putting forth her best effort, she will keep working on it until it’s right.

“If I don’t feel it in my bones, I’m not going to release it,” Ava attested.

Ava also discussed the concept behind her debut album Heaven & Hell, which is broken up into two “sides” thematically.

“We always have an angel and a devil on our shoulders. I wanted it cut in half [with] a brighter side and an edgier, darker side. Pick your mood,” said Ava.

She also confirmed that more music is on the way.

“We’re working on a deluxe,” she teased. “There are a lot of big, anthemic songs coming.”

The singer also opened up about her thoughts about the ongoing pandemic, revealing to Billboard, “We can’t tour or be with crowds and hug our fans, so it’s definitely challenging.”

While she does miss performing, Ava says the pause has made her appreciate her fans all the more.

“Seeing everybody, and how they’re affected by my music, is really inspiring,” she noted.