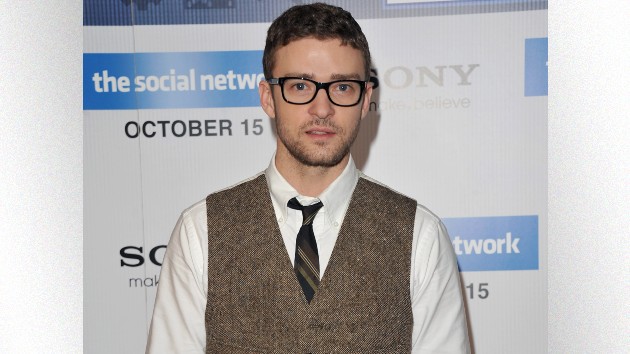 Jon Furniss/WireImageRemember that time Justin Timberlake was in a Oscar-winning movie? He does.

October 1, 2010 marked the release of The Social Network, the movie that documented the rise of Facebook.  Justin memorably played Sean Parker, the co-founder of Napster and Facebook’s first president.

Justin celebrated the anniversary of the film by posting an on-set photo of himself and co-star Jesse Eisenberg, who played Facebook founder Mark Zuckerberg.

“10 years ago today The Social Network came out,” he captioned the Instagram pic. “A lot has changed in a decade. That’s an understatement… but I’m just gonna leave it at that.”

He then quoted one of his character’s lines from the film: “Also, drop the ‘The,’ it’s cleaner.”

In the film, it was Parker who convinced Zuckerberg to change his invention’s name from its original moniker, “The Facebook.”

But as one fan pointed out in the comments, “It’s not like it’s the 25th anniversary of *NSYNC today or anything. Remember your real roots, kid.”  The fan is correct: October 1, 1995 is the day Justin, Joey, Lance, Chris and JC officially became a group.

None of the other members of the group acknowledged the anniversary either, by the way.

As for what’s changed in that decade?  Justin’s gotten married to Jessica Biel and had two children, released three solo albums and a book, performed at the Super Bowl for a second time, won four Grammys, was nominated for an Oscar, and appeared or lent his voice to more than 10 additional films.

Still waiting for that *NSYNC reunion, though.