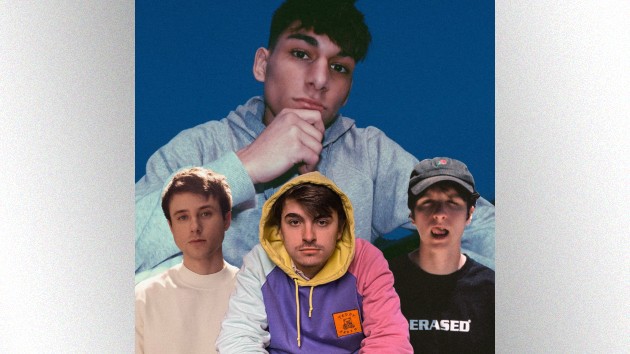 Courtesy Atlantic RecordsA while back, “Death Bed” singer Powfu had released a song called “Eyes Blue Like the Atlantic Part 2,” a collaboration with Alec Benjamin, Italian producer Sista Prod and Rxseboy. Now there’s a video to go with it.

The clip features Rxseboy floating in a pool, rapping about being cheated on by the woman he loves, followed by Powfu on a couch, rapping about how he feels about the fact that the relationship is ending.  Then, Alec, walking on the beach, brings it home by singing about how he’ll eventually get over it.

As previously reported, the origin of the song is somewhat complicated.  Basically, what happened is this: A Vine artist named Ollie MN created the song’s hook — “Eyes blue like the Atlantic/And I’m going down like the Titanic” several years ago.

Sista Prod then turned that hook into a full-length song, “Eyes Blue Like the Atlantic,” which became big on TikTok.  Next, Powfu, Alec Benjamin and Rxseboy got involved and recorded a whole new version, which is “Part 2.”  It’s since racked up more than 10 million streams worldwide.