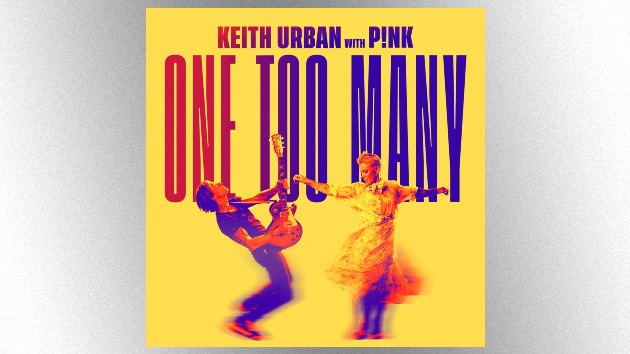 Capitol Nashville“One Too Many,” Pink‘s new duet with country superstar Keith Urban, has just been released.

The song about someone who knows they drink too much, and feels badly about the fact that their partner has to put up with their bad behavior.

“I spend all my money drinking on my own, yeah / In this bar, just sat here staring at my phone,” they sing. “And I keep second guessing, where did I go wrong? / I know I’m proud, but I’ve had one too many / Come take me home…”

The song is featured on Keith’s new album The Speed of Now Part 1.  He and Pink will give the song its TV debut on the Academy of Country Music Awards tonight on CBS at 8 p.m. ET.  Keith’s also hosting the show.

The video for the song will be out tomorrow.

Pink previously scored a number-one country hit, “Setting the World on Fire,” with a different country superstar, Kenny Chesney.  Her most recent album Hurts 2B Human features a duet, “Love Me Anyway,” with yet another country superstar, Chris Stapleton.