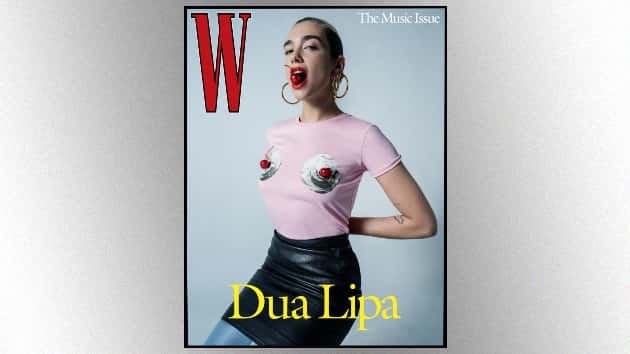 Photo: Tim Walker; Styled by: Sara MoonvesDua Lipa is releasing a remix album, Club Future Nostalgia, later this month.  While she realizes that she’s putting out an album full of dance songs at a time when all the clubs are closed, she still feels it’s a project worth doing.

Dua graces one of two covers of W magazine’s Music Issue, and inside, she explains that despite the COVID-19 pandemic, dance music still has its place.

“What I’ve realized during this time is that you can bring the fun no matter where you are,” she tells W. “If I can make music to aid that in any way, then I feel like I’m doing my job.”

She says she took a similar approach to releasing the original Future Nostalgia album, which has produced the smashes “Don’t Start Now” and “Break My Heart.”

“My biggest hope for putting this album out at a time like this was that during moments of uncertainty, it would give people the best kitchen dance parties ever,” she says.

But while she’s got the world dancing in their kitchens, Dua admits that enjoying music in a crowd is something she really misses.

“I miss touring, that human connection, having the excitement of going out to a restaurant or a bar or something and hearing a song and just freaking out that it’s out,” she says.

However, she points out, “It’s important to remember that we’re all collectively going through the same thing, and right now there’s no fear of missing out in any way. We’ll just have to pick things up where we left off when the time is right.”

The Music Issue of W magazine is available on August 25.