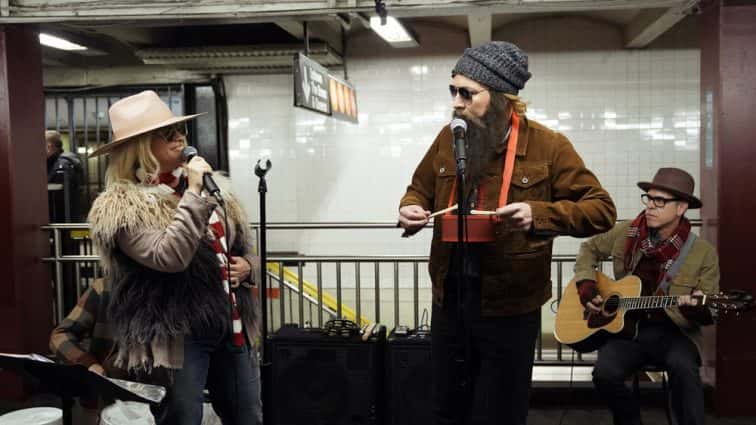 Andrew Lipovsky/NBCAlanis Morissette was Jimmy Fallon‘s musical guest on Wednesday’s The Tonight Show to promote her new album, Such Pretty Forks in the Road, arriving May 1, and her Broadway musical, Jagged Little Pill, which opens Thursday.  The appearance included the two busking in a New York City subway station.

Morissette and Fallon taped the segment the night before, with she and Jimmy donning disguises as they performed undercover in the subway station below NYC’s 30 Rock, where the show is taped.

Alanis, in a floppy hat, blonde wig and sunglasses, and Fallon, wearing a fake beard and sunglasses, kicked off the performance with a rendition of “The Little Drummer Boy.”  Fallon spent the song banging on a tiny drum hanging from his neck.

After peeling off their disguises, Morissette and Fallon led the swelling crowd of onlookers in a rendition of Alanis’ 1995 hit “You Oughta Know.”

Morissette closed out the show with a performance of her new song, “Reasons I Drink.”