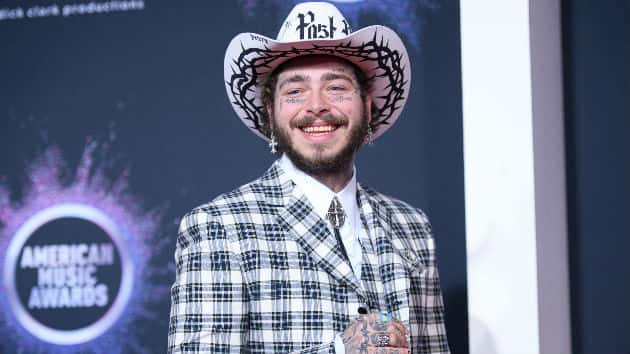 Post Malone holds onto the top spot on the Billboard Hot 100 for a second week with “Circles.” Helping it hold steady at number one: Posty’s performance of the song on the American Music Awards on November 25, which led to a 45 percent sales boost for the track.

Meanwhile, “Roxanne,” by Arizona Zervas, jumps from number 12 to number five. The song — not to be confused with the classic song “Roxanne” by The Police — is currently the most streamed track in the U.S.

“Roxanne” was initially self-released, but after it became a huge viral hit on TikTok, Arizona — a rapper, singer and songwriter from Marlyand — was signed to Columbia Records.  He’s the second viral star this year to be signed by the label, following Lil Nas X.

Elsewhere on the chart, Lewis Capaldi‘s “Someone You Loved” stays at number two after three weeks at number one, Lizzo‘s “Good As Hell” holds at number three, and Maroon 5‘s “Memories” is still number four.

Finally, Mariah Carey‘s “All I Want for Christmas Is You” climbs to number 18 on the Hot 100. Last year, it reached number six, making it the biggest seasonal hit on the Hot 100 in 60 years. How high will it go this year? Stay tuned.