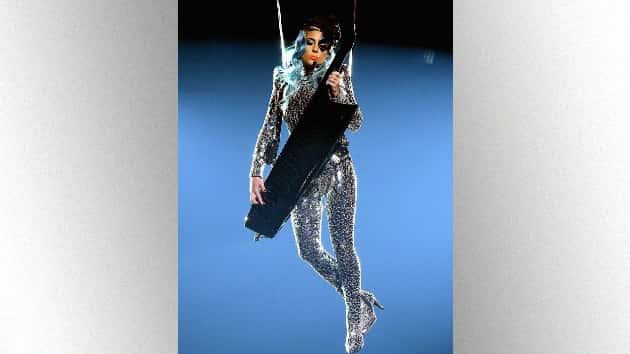 PRNewsfoto/MGM ResortsLady Gaga was a bit too enthusiastic Thursday night at her Enigma show in Las Vegas: After bringing a fan onstage and jumping into his arms, both of them managed to fall off the stage.

A fan who attended the show tells ABC News that Gaga read a letter from a fan named Jack onstage, and then invited him to come up and join her.  After they hugged, Gaga suddenly jumped into his arms and wrapped her legs around him.  He started bouncing her up and down, but then he moved his foot back to where the stage narrowed, causing them both to tumble off the stage and into the audience.

Thankfully, neither of them was hurt, and Gaga invited Jack to sit with her at her piano bench while she played “Million Reasons.”

“That was a fall!” she said, and then asked Jack, “Can you promise me something? Can you just forgive yourself right now for that happening?”

Gaga then revealed that she’s fallen offstage before, noting, “I’ve actually stage dived…it was like a run, and then I just stopped leaping, and just dropped.”

“You know what we did?” she continued. “We fell into each other’s arms, Jack. We’re like Rose and Jack from the Titanic.”

But Gaga must have felt pretty sore after the show: On Instagram, she posted photos of her post-show routine, which includes “ice bath for 5-10 min, hot bath for 20, then compression suit packed with ice packs for 20.“