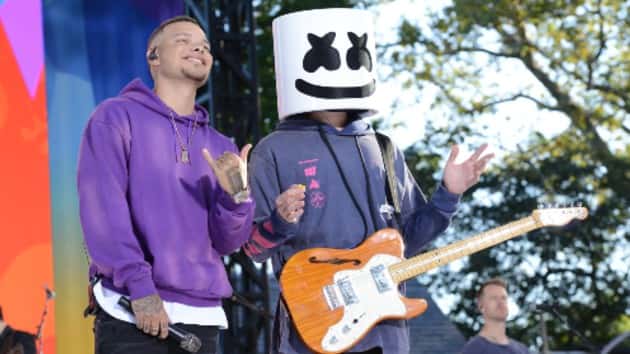 Walt Disney Television/Lorenzo BevilaquaAfter releasing singles with the likes of Bastille, CHVRCHES, A Day to Remember and Tyga, Marshmello‘s latest hit is “One Thing Right,” featuring vocals by award-winning country star Kane Brown.  Kane is no stranger to pop collaborations, and he admits it would have been “dumb” for him to turn down the chance to work with the helmeted EDM star.

Prior to working with Marshmello, Kane had joined Khalid on a remix of Khalid’s song “Saturday Nights,” and last year, he appeared on a remix of Camila Cabello‘s “Never Be the Same.”  So what’s his criteria for crossing genres to record with pop stars?

“It just depends, you know,” he tells ABC Audio. “The last two collabs, with ‘Mello and Khalid, they both asked me. And so if it makes sense, y’know, why not do it?”

He adds, “And ‘Mello’s huge, so I would’ve been dumb not to jump on that!”

But the big question is whether, while working on the song, Kane actually got to see Marshmello without his signature helmet.

“Yeah, yeah,” admits Kane. “But everybody’s pretty secret with him.  They understand that he don’t wanna be seen, so nobody tells!”