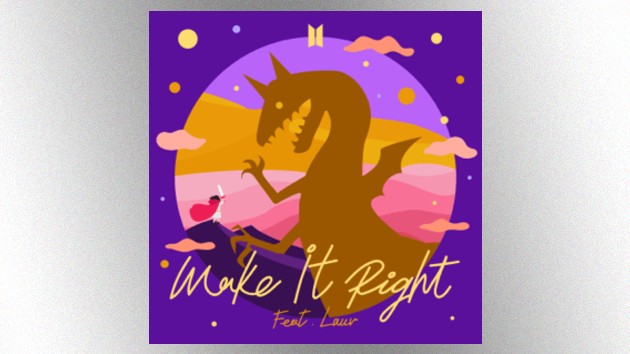 The original version of the song, co-written by Ed Sheeran, appeared on BTS’ album Map of the Soul: Persona EP. The new version starts with an English-language verse and chorus from Lauv.

The band has also released a video for the song which features shots of BTS performing in concert intercut with animated footage that tells the story of a boy and the girl who becomes his protector by magically transforming into a cape.

As Billboard notes, the song and the video are both extended metaphors for the relationship that BTS has with their devoted fans, the ARMY.

“I was lost, I was trying to find the answer/In the world around me, yeah, I was going crazy/All day, all night
You’re the only one who understood me/And all that I was going through,” Lauv sings, describing how the ARMY supported BTS as they struggled to deal with their growing fame.

He sings, “You were the reason I survived/You were there for me through all the times I cried.”

Lauv has a similar relationship with his fans. On Thursday, he tweeted, “feeling hella positive about life and all the music and beautiful times ahead. thank u guys for being here for always having my back and for dealing with my weirdness.”

The BTS ARMY is pretty happy about the collaboration, with many tweeting to Lauv, “Welcome to the family.”

Lauv’s debut album ~how i’m feeling~ is out March 6.