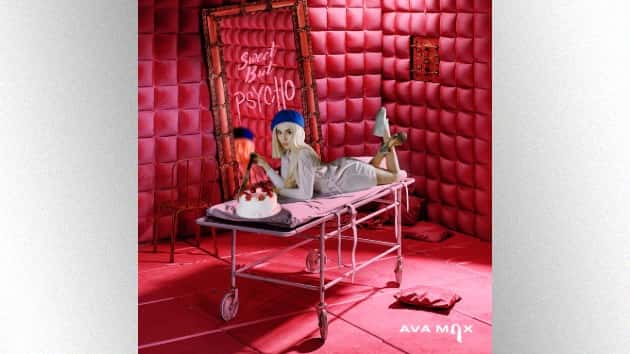 Atlantic RecordsMove over Bebe Rexha, Dua Lipa and Rita Ora: There’s another Albanian female pop star in town. Ava Max, born in Wisconsin to Albanian immigrants, has just hit #1 on Billboard’s Emerging Artists chart thanks to her single “Sweet but Psycho,” which has just entered the Top 40 on the Hot 100.

In the video for “Sweet but Psycho,” Ava plays a crazy, jealous woman who ties her boyfriend up, chases him with an axe, throws knives at him and sets him on fire.  But she tells ABC Radio that that’s not actually what the song is about.

“It’s about a girl who’s misunderstood in a relationship and she’s actually feeling psycho and out of her mind because of the triggers in this relationship,” Ava explains. “But she’s not psycho at all: She’s outspoken and she’s strong and she’s a wonderful female. And in the end, the guy loves all of her sides.”

While the guy in the song sounds pretty understanding, Ava says in real life, she — and many other women — have dealt with being unfairly described as crazy.

“Oh my gosh, I mean, I’ve had many experiences of men calling me psycho,” she laughs. “Even my friends — I’ve witnessed my friends getting called psycho. But I think in general…the song should bring out the fun spirit in it, you know? We’re not psycho at all!”

While “Sweet But Psycho” has just hit the top 40 here in the U.S., it’s a phenomenon across the pond. It’s been number one on the U.K. chart for four straight weeks.

Ava told the U.K.’s Official Charts Company that she plans to release her debut album later this year, much to the delight of her fans, aka “Avatars.”